In celebration of RISEP's 25th anniversary, here is a look back at the state of the environmental industry from a few of RISEP's founding members.  Their energy and vision 25 years ago made lasting contributions that led to vast improvements to environmental regulations and strengthened the environmental consulting field and community. 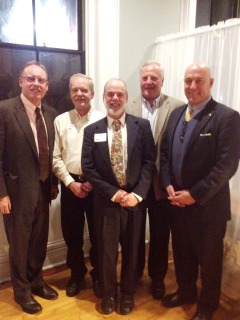 "I was new to the environmental industry when I joined RI Analytical as General Manager to help Tony Perrotti develop strategy and marketing plans for the next phase of his company.  As I met and spoke with clients, fellow advisors and regulators in the local industry, I was struck by how many smart, thoughtful and  capable professionals were in our local industry. I was surprised to learn that there was no consistent  forum for gathering these professionals and giving them regular opportunities to meet, share ideas and continue to improve their services and the marketplace for them.

"My idea to create such a forum was welcomed and enabled with the enthusiastic and experienced help and dedication of Jon Feinstein, Rich Hittinger, Phil Virgadamo, Gregg Benik and others.  I had a friend who I had hired to design a new logo for RI Analytical and she generously donated a beautiful logo design for RISEP as well - one with human images forming the image of a tree.  I left the environmental field but had so enjoyed meeting and working with professionals with such generous spirits that I continue to enjoy their friendship today.  I am pleased to see that the organization continues to gather professionals, working together to make our community better."

"Growing up in RI and involved in the environmental sector from academia to Business was an interesting and challenging evolution. The connection between people in this emerging area was not happening. As I recall the finalization of concept for creating RISEP was completed at a bar in Newport where my boyhood friend Lorne Adrain and I crafted the essentials of the organization on the back of a napkin. Lorne has the unique ability to bring people together and even at that time saw the fragmentation in the industry. Soon after our evening in Newport, Greg Benik volunteered to draft a bylaw agreement and we were off to the races contacting and connecting with colleagues, regulators and the like.

"I have recently moved back to RI after being away for 23 years and am delighted that RISEP has matured into a recognized environmental organization and conducting important initiatives in the State. More importantly, I have seen the results of environmental conservation and planning throughout the State resulting in a positive impact on the environment and quality of life. A job well done !!!"

"The early 1980s was a crazy time for those of us in the emerging environmental field. Chemical waste dump sites, soon to be designated "Superfund Sites" were popping up all over.  The gross contamination from these sites was unbelievable and hard to forget. There was very little regulation, legislation and guidance.  We were experimenting and testing cleanup methods.  It was kind of like the Wild West as we were scrambling for solutions and a bit confused at times.  Home owners and the general public were hysterical and angry over contamination impacts.

"During the following years as Superfund was developed, more and more regulation was developed, sometimes hastily and sometimes without input from the environmental community.  At times, environmental professionals representing clients and regulators were at times considered adversaries.  When Lorne Adrian, Rich Hittinger and Gregg Benik approached me, we all felt that there was a need for a collective effort among environmental professionals (mainly engineers, scientists, and legal) to collectively work together with regulators and legislators to develop practical and sensible guidance that would protect the public and allow for practical clean-up approaches. Once formed, RISEP, as a collective group, had a profound impact on the development of coordinated scientific, engineering and regulatory approaches to environmental risk issues that continues today.

"I am pleased that RISEP and it's mission has continued for 25 years.  It makes me proud to had a small part in its beginning."

From Rich Hittinger - Founding Board Member

"I was in on the formation of RISEP and have been active ever since. In 1989 I was running Environmental Science Services (ESS), which was both the lab and the consulting group. I had been to several meetings of the Environmental Group of AIM (Associated Industries of Massachusetts) and I could see the advantage of having a unified voice as a burgeoning industry.

"Of course I knew Jon Feinstein (actually shared a building with him at one time) and John Hartley and George Palmisciano and Greg Benik all pretty well. I think it may have been Lorne Adrain who first talked about the idea of RISEP with me. After several phone calls (no email in those days), we decided to get together and make it happen. We met for the first time at the VHB office on Broadway that is now the GZA office. It was on that late afternoon that we put together the basic structure of RISEP. Our main ideas were to have a unified voice to help direct legislation and regulation that would affect our industry. We would also provide some central organization to review and discuss new technologies that would be used by our industry both for investigation and for remediation. We also thought at the time that it may help us get more information from the EPA regarding what they were planning and doing in RI."

"Here are my recollections from the time.  We (the consulting community) found ourselves at a point where the “Superfund approach” was the pattern for decision making in RI as there were no regulations to address the “how clean is clean” questions.  At the same time, property transfer site assessments were being asked for by the lenders as a result of a lawsuit involving Fleet Bank (I believe it was known as the Fleet factors suit) in which the bank was found to be liable under Superfund as an “operator.”  This, and the advent of the 21E requirements in Massachusetts provided a growth market for Phase I ESA work. (This is before the ASTM standard was developed).

"These two issues fostered the need for the RI consulting engineering community to begin organizing as a group to share experiences and establish certain common approaches to standard of care.  Shortly thereafter RIDEM promulgated the draft Remediation Regulations.  RISEP members were key contributors to the formulation of those regulations (as well as others) and in many ways we added sound implementation practicality to the regulations.  RISEP members continue to volunteer their time on the various RIDEM  regulatory committees and more recently, RIDEM has turned to RISEP for the initial development of policy; again, to provide practical alternatives to regulatory implementation.

"I‘ve been away from RISEP activities as my role in GZA expanded and I am very pleased to see the continued level of involvement by GZA folks in RISEP. "

From George Palmisciano - Founding Board Member

"I remember vividly, like it was yesterday, meeting in VHB’s office on Broadway in Providence with a half dozen + people to discuss the formation of a new group.  The discussion was led by a gent I had never met before…Lorne Adrain, a kid from Harvard that was new to the Environmental industry.  I quickly realized that he knew what he was doing as he led us through  a brainstorming session where we laid out the foundation of what was to become RISEP.  I had never really been a part of such a session before that time and I remember the feeling of accomplishment and excitement at the end of our meeting, realizing that I was going to be part of a really good thing.  We definitely were in need of a group where Environmental professionals could meet to share their experiences and tribulations and discuss our industry in a constructive manner.  There was no other forum available at that time for sharing information and the group allowed us to get a heck of a lot done.

"Fast forward 25 years and I am very happy that RISEP has continued on and blossomed into a formidable group of individuals that help lead the way on things Environmental in Rhode Island.    We’ve become a solid leaning post for environmental regulators on a whole host of issues and have had a direct impact on environmental policy and rules and regulations.  I’m glad and proud to have been a member of RISEP for the past 25 years.   The new and future  leaders of RISEP have a great tradition to uphold and I’m sure that they will ensure that the next quarter century is just as prosperous and successful for RISEP and our group will continue to be a leader in the industry."

Below is a copy of the original minutes from the first RISEP board of directors meeting on December 15, 1999. 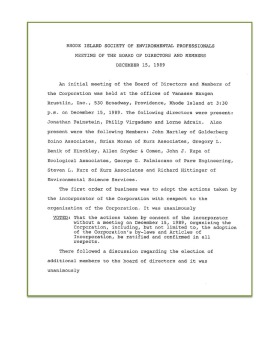 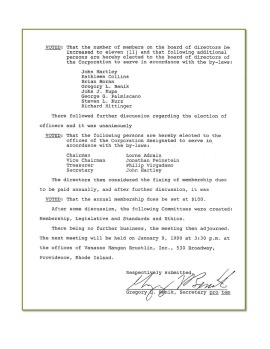 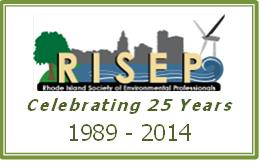